Two weeks into using Ubuntu I'm finding it a bit of a mixed bag. It's not necessarily any worse of an operating system than Windows - but coming from a strict Windows background the learning curve is high. Very high. read on!

Unity Desktop: First up, I like the Unity desktop. The way I use the Windows desktop is to place my most used apps on the taskbar and then access other software by tapping the windows key and typing in what I want; earth, note, cmd etc… GNOME with the Unity shell has that same functionality making it at least as useful as the Windows desktop.


That said, one of the things that I appreciate about the Windows 7 start menu is that it is discrete. Let’s say I’m working in Illustrator and need to open the calculator. I hit the Windows Key, the start menu pops up occupying a small corner of the screen. I quickly type ‘calc’ and I’m away. It’s not overly distracting, I can keep focused on my work while doing it, most of the time I keep working without even noticing it. That was the main problem I had with Windows 8 - hitting the Windows key changed the entire desktop to the Metro start screen. The transition is jarring, distracting, and ultimately destroys my train of thought. When a UI is well designed you shouldn't notice it at all.


Unity's dash is no where near as distracting as the Windows 8 start screen, but I feel it is perhaps a little large for my liking - occupying between one quarter to one third of the screen space whenever the windows key is tapped. That said, where Metro succeeded, particularly with Window's 8.1, was tidying up the start menu - getting away from the mess of nested folders that the traditional start menu often devolves into, and making it easy to find what you were looking for quickly. The dash also does a great job of presenting a tidy interface, presenting the icons you need while filtering out the crap. The dash may be the best compromise between the discrete but cluttered traditional start menu and the jarring but well organised Metro start screen. I would need to spend more time with the dash to really get a feel for it.


Ultimately criticisms of this nature against Linux are a moot point as both the graphical shell and desktop environment can be swapped for other alternatives. Don't like the UI? Just try another one. And really this level of customisation is a massive advantage of Linux over Windows. How much better would Window's 8 have done had users had the ability to simply swap out Metro for something else? And for a media PC it's a non issue anyway.

Start-up and Shutdown: Something else really like about Ubuntu is the blazingly fast start-up and shutdown speeds. Shutdown in particular in simply astounding, especially against Windows 7 which feels very sluggish by comparison. I will totally acknowledge though that Microsoft has made huge advances in this area with Windows 8 and Windows 10, but still nowhere near as fast a Ubuntu.

So far for me the big area where Ubuntu completely falls over compared to Windows is the initial setup. The installation itself is very straight forward. The installer offers a fair amount of customisation, and does a fair job of explaining what each option means. But after the OS is installed the learning curve to actually set it up skyrockets.


The beautiful thing about Windows in 2015 is that it just works. After the initial installation the OS needs the minimum of fuss to get it on it's feet. Back in October I installed the Windows 10 preview on my old 2012 Samsung NP350V5C Laptop. Windows automatically recognised and installed all the hardware with the exception of the SD card reader and the graphics card (hybrid Intel 4000 / AMD HD 7670M). After installing those two driver packages and the settings app (needed for the volume and screen brightness keys to work) the computer was ready to go. Everything works.

Ubuntu is in no way that simple.

No Device Manager? For example, simply checking that all connected devices are working. Typically Windows does not recognise the media PCs TV capture card automatically and I have to manually install the driver. I wanted to make sure that the TV capture card was functioning under Ubuntu. So I went into System Settings expecting to see something like Windows device manager. No dice - nothing like that is installed in Ubuntu by default...

So I headed online where people were suggesting the terminal command sudo lshw - which has the effect of vomiting several pages of data about all connected devices onto the terminal, making finding information about a single, perhaps non functional, component very cumbersome... People have also suggested searching through the repository and downloading a device manager app, which I am yet to look into. Who knew something so simple would be so hard to accomplish.


At first I thought that the lack of a device manager app was due to Ubuntu wanting to be as lightweight as possible - perhaps to avoid the software bloat that affects Windows, or to give users full options for customisation (an 'install what you want to use rather than what we tell you to use' mentality). But then Ubuntu ships with a full installation of Libre Office, Firefox, a screenshot app and other software so obviously software bloat isn't a major concern to Ubuntu. A simple device manager would have a far lesser footprint in terms of software bloat than a full office suite. Why Ubuntu doesn't ship with a basic graphical tool to easily identify and diagnose hardware faults is beyond me.

Playing Video: Next thing. It appears that by default Ubuntu treats video playback as the system being left idle. As a result Ubuntu would turn the screen off and then go to the lock screen every 10 minutes when watching video. It didn't matter what I was using to watch video (Chrome, Kodi, VLC) - a seriously annoying fault for a media PC. To be honest I find this absolutely baffling - in a world where streaming is overtaking live TV why would an operating system's default setting be to turn the screen off during video playback? 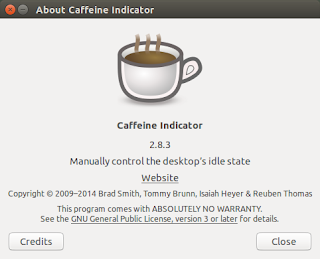 Again I hit the net. Suggested solutions included going into every individual app to check if they can be set to disable screen locking, using a combination of System Settings and the terminal to disable the system lock and screensaver entirely (not ideal), and using a script to simulate mouse movements to trick the system into thinking you have interacted with it.


I ended up installing an app called Caffeine which disables Ubuntu's lock when an app is in full screen mode. Something of a headache in itself. Caffeine isn't available through the repositories, so installing it required a crash course in using the terminal and installing PPA packages.

A huge amount of effort for something so simple, and that Windows does by default.

Still More Problems: Those are the more annoying examples, but the system has a variety of other bugs that I still need to tackle;

1)  - Ubuntu doesn't appear to have an equivalent app to AMD Catalyst for easily adjusting colour. I'm using the default community developed open source Radeon driver. Under Colour in System Settings it tells me that my TV doesn't have a profile suitable for whole-screen colour correction. Hit the net. People are saying you need other (expensive) hardware and correct profiles to calibrate monitors. Others are saying you can input colour adjustments through the terminal assuming you know the colour you want, which seems like a lot of trial and error to me... I just want to knock the saturation form a little...

2) - The computer won't go to sleep / hibernation. This was a problem before I installed Caffeine.

3) - The mouse responsiveness is kind of sketchy. On the desktop the mouse behaves a little twitchy, but in Kodi it barely functions at all with the cursor either moving very slowly or not responding to clicks (sometimes both).


So that's my first impression. I certainly like Ubuntu, and I can see that it's a very capable operating system. I also understand that I've only scratched the surface. Still, anyone going into Linux as an absolute newbie best be prepared for an uphill start.
Posted by Masarius at 15:31