Gaming as a Father

6 months later.... While I had every intention of keeping this blog updated, the second half of 2013 is a complete blur to me. And with that said...

I would to announce the arrival of my daughter, Abigail, who was born on October 30th at a healthy 3.075KG. 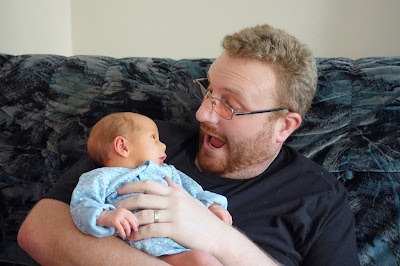 The last half of 2013 has been the busiest I have ever been outside of university. My wife and I had already booked the venue for our wedding back in December 2012, and when we got pregnant decided we would keep the set date of October 12th.  At the time it felt like the sensible thing to do – deposits had been made, a photographer and celebrant had been booked, and shifting things around seemed like it would be a colossal pain.... what could go wrong? But here’s the thing - planning a wedding, setting up for a baby, and trying to buy a house all at the same time was nightmare. There wasn’t much time for gaming – let alone blogging! 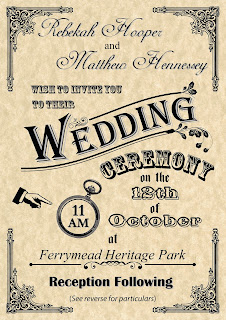 But in the end it all worked out. The wedding itself was great. We had a 1890s theme, complete with top hats, vests, frock coats, and fob watches. We held it at Ferrymead Heritage Park which is a recreation (complete with working trams) of 1910 Christchurch. We made it a day time wedding, made sure plenty of non-alcoholic drinks were available, and made it more of a sit down affair. The ceremony was amazing, we had written our own vows and the bridesmaids and groomsmen walked up the aisle to the Deep Space 9 theme, and everyone left the church to the Throne Room tune from Star Wars IV. The celebrant later emailed to say that it was one of the best ceremonies he had ever done. The heritage park was then open for everyone to enjoy before the reception started that afternoon.

With the exception of a few minor hiccups (which in hindsight could probably have been avoided – maybe I’ll blog about it in the future), the day went really well. 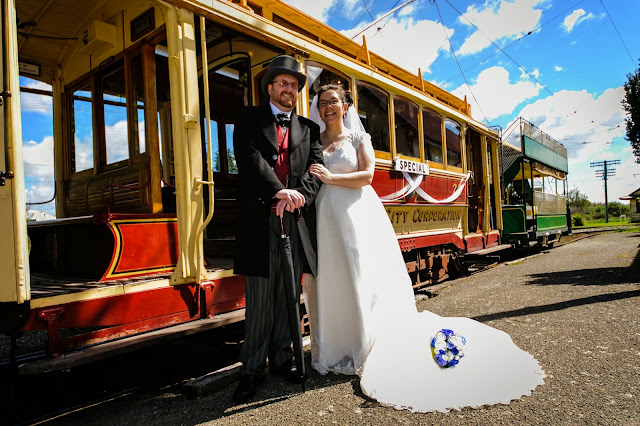 Fatherhood
Due to complications Abby was born unexpectedly just two weeks after the weeding by caesarean section following an induced labour.

So what’s it like? Challenging, tiring, sometimes very frustrating, and for the first few weeks you will go through a little bit of ‘oh crap I have a baby now – what do I do’ shock. But overall it is very rewarding, very satisfying, and you’ll enjoy every moment of it.


It is hard, no doubt about it. It’s a commitment, one that will completely change your life.

On a good night Abby will sleep from around 11pm to 3:00am, then again from about 3:30am to 6:00am. And on a bad night she will be up every hour. Luckily I have a fantastic wife who is happy to do the overnight stuff so I can get enough sleep to function reasonably ok at work the next day. But still my wife and I have not had a full night sleep since Abby was born, and we’re both exhausted.

And sometimes she’ll cry just because she can... and when you’re already tired it can be a real trial to keep your cool.

And everything has an extra layer of difficulty to it. Want to go out for a walk? Better add an extra hour to the time it will take you to get ready by the time the baby is fed, nappy changed, dressed, and nappy changed again. Want to play D&D? Better allow for plenty of breaks to your wife can go breastfeeding. 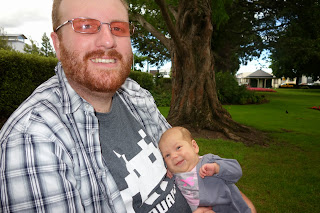 But then you will teach her something new, like how to give kisses, and feel a sense of pure accomplishment. Or she’ll look at you and smile when you sit down next to her – letting you know she appreciates everything you do for her and that makes it all worthwhile. That’s the rewarding part.

It’s also fascinating watching her explore the world for the first time. Things that I find absolutely mundane, to the point that I wouldn’t even notice them, are jaw droppingly fascinating for her. She seems to really like my Sega Master System collection, which she can stare at for minutes at a time. Apparently babies initially see in black and white, and I guess the grid pattern of the boxes really stands out to her.

And then there is the stuff that is yet to come. I am very much looking forward to when I can share the things that I enjoy with her. When will we first watch Star Wars? And how long can I keep the prequel films hidden.... And when will we sit down and play our first RPG together? Will she like Star Trek? Will she play D&D? Will she enjoy computers? Will she like using my microscope?

Yes, fatherhood can be hard. But I wouldn’t swap it for anything.

Gaming as a Dad
Now for the question on every gamers mind – does becoming a dad kill your ability to play games? Answer: No. Well not really - it will change the type of gaming you can do.

Here’s the thing – when I get home from work in the evening I’m completely stuffed. I might get 4 to 6 hours of sleep a night, and after an 8 hour day in the office (plus 2 hours commute) I’m zonkered. When I get home I’m more likely to crash on my lazy boy chair and have cuddles with Abby while surfing the net on my tablet. On many nights gaming is the last thing on my mind. Then on the weekend time has to be shared between playing with and looking after Abby, spending time with my wife, my other interests, and gaming.

For the most part complicated games have been out of the question. I don’t want to learn new game play, and I don’t want complex story lines that I have to remember. I want short simple games that I can pick up and play between large breaks. I want to be able to play on my laptop in bed, or when lying fully reclined on my chair. Stuff that I don’t really need to pay a whole lot of attention too.

So what have I been playing? Retro games mostly. I’ve been hitting up my gog.com account and Steam for the old school classics. Stuff I played when I was a kid. Stuff that I know. 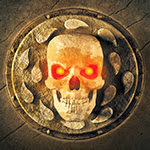 In the last 6 months I’ve played Dungeon Keeper 2, Caesar 3, Quake, a little bit of Hexen, Doom (with the Brutal Doom mod), Age of Empires 2, and Carmageddon.

But it’s not all retro and simple gaming. On the weekends when I’ve got a little bit more time I’ve been playing GTA 5. I can usually fit in a couple of hours a day over the weekend, so that game will keep me going for a while :-P. With the holidays I’ve been playing through Baldur’s Gate: Enhanced Edition (which I’m thoroughly enjoying).


But something I'm really enjoying is sharing my gaming with Abby. With my recent play through of Baldur's Gate I've been able to play on my laptop while holding her on my lap, and have narrated the game her as I've played - reading the character text, explaining what's happening in the game, and talking about my in game decisions. Essentially using the game as a story book. It has been a great bonding experience for us.

I've been able to do something similar while playing GTA. I'm very much looking forward to introducing her to more games, and sharing those experiences with her. In future years it will be a heap of fun to show her the games that I grew up with, my favourites, and experiening those nostalgic titles again through her fresh perspective.

Then there is the straight up enjoyment of parenting which gaming can enhance. A few days ago I was playing Baldur's Gate at around 8am. It was heavily raining outside, and I was sipping a coffee. Abby was lying in the bed next to me asleep, snuggling into my leg, and I was playing the game with one hand while giving her a back rub with the other. It was a moment of pure gaming and parenting pleasure.

So does having kids ruin gaming. Far from it. 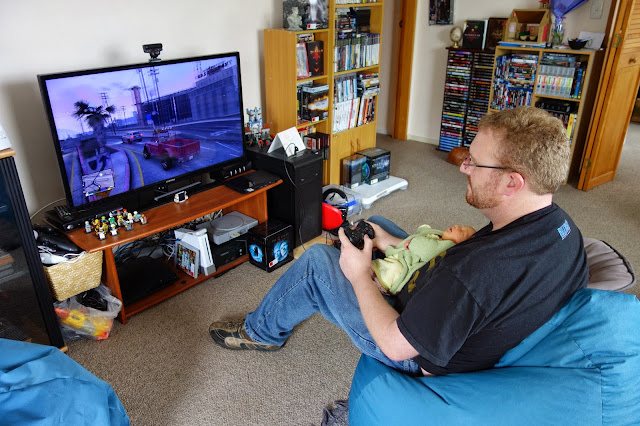