I’ve just spent a lazy Sunday afternoon playing new indie title Gunpoint by Tom Francis. And what a great afternoon it was. Honestly, without deadlines, sales targets, or publishers breathing down your neck, indie games can concentrate on just being fun. And Gunpoint is one of the most fun titles that I have played in a long time. 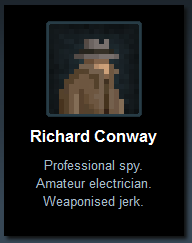 In Gunpoint you play as Richard Conway – a freelance detective with a nifty pair of futuristic pants which give him superman level jumping and door kicking abilities. Richard is embroiled in a murder plot and must take contracts from a variety of people involved in the crime to clear his name, work out what actually happened, and catch the bad guys.

But really the story is just a basic means to move you between levels.  At its heart Gunpoint is a puzzle game. And it does this extremely well.

Each level presents you with a building (sometimes up to three) in a two dimensional plan style view. The buildings start off as two story affairs, but end up as multi-floor towers. Each building is populated by several guards. These range from rent-a-cops, armoured guards, and professional hit men, each with their own unique abilities. Rent-a-cops can be tackled and knocked out. Armoured guards can’t be tackled and must shot or evaded, and hitmen can see in the dark and can't be intimidated.

Your mission is to navigate each building to carry out your clients instructions – which usually means getting to a particular computer terminal to steal video files or manipulate data. And each client usually has a secondary objective which will earn you more pay if you can achieve it; leave no witnesses to your intrusion alive, hack any additional laptops you find, get through the building as stealthily as possible, et cetera.

Navigating the buildings is fantastic fun. To get around them Richard can scale walls, jump through windows, leap huge distances and (eventually) kick down doors. But, most importantly of all, he can also hack the circuitry of the building. This allows you to essentially re-wire the structure in any way you want. Light switches can instead open and close doors, or security cameras trigger elevators, metal detectors activating lights.... almost any combination is possible.

As a result many of the levels have several ways in which they can be approached. Do you kick down a ground floor door and hope that you can evade or shoot the guard on the other side before you are shot yourself? Do you approach from the roof and jump through the skylight, alerting the guards to your presence, and then scurrying away before one of them finds you? Or do you go the electrical rout - re-wiring a security camera so that it turns off the lights in another room, triggering the guard in that room to toggle the light switch which had already been re-wired to call the elevator in the room you wish to enter, distracting the guard in that room so you can sneak by him.

The gameplay is supplemented by excellent level design which provides just the right amounts of linear lateral problem solving to free exploration. Towards the end of the game you are having to really think about how to get past the hitmen and armed guards. The game also features a robust auto save system which allows you to try out your ideas, and easily reload to a few seconds before your attempt if you are killed. And the controls are very good (WASD + mouse). Richard never feels sluggish or laggy.

A certain dry humour permeates the experience. Quips are made about the silliness of achievements, industrial espionage, and the game itself. The game is often very funny, with jokes being well written, not over-the-top, and don't detract from the gameplay.

Some minor issues....
There are a few niggling issues. The game feels too short. Of the 20 levels currently available the first 10 or so are of a more basic style. It's not until the last 2-3 levels that you start getting complex buildings that you can really sink your teeth into, and then the game ends. It leaves you feeling like you have yet to see everything Gunpoint has to offer. Like the game is missing its magnum opus. Gunpoint has a level editor, so hopefully we will see some new maps come out of the community (or the developer, if you are reading Mr. Francis :-P) soon.

The game also has limited scope for replaying levels. As you progress through the game you earn experience points which you can spend on upgrading your abilities. You also earn cash from completing levels which allow you to buy new abilities and equipment - a hand gun, ability to break windows silently, kick down doors...  While you can go back and replay levels as you wish, I found that I got an A+ grade on the majority of levels on my first attempt, and few of the earlier levels benefited from gaining upgrades or new equipment. It would have been nice if levels had additional objectives that could only be accessed through gaining upgrades, or were made markedly easier through new equipment -  encouraging replaying to achieve higher grades.

But over all this is a minor gripe.

So far I've had over 5 hours of entertainment from Gunpoint, which is pretty damn good considering the US$10 price tag. The game is perhaps the most unique and fun title that I have played in weeks. Head to Steam right now and pick it up - it's well worth the price of admission.
Posted by Masarius at 19:24